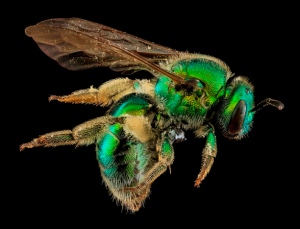 Quick- What color is a bee? The most common answer would likely be “Black and Yellow”, and that is true for a majority of bee species. Also common are plain black and black and white. But how about metallic emerald green? Or iridescent blue and purple? These spectacular colors are displayed upon certain bees within the family Halictidae, commonly known by the less spectacular name, Sweat Bees. 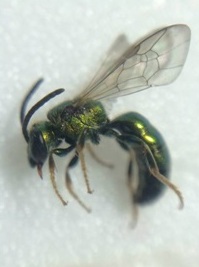 Halictid bee captured at the Wagner

The family Halictidae is very large and diverse. They are, in fact, the most common and numerous bees in almost any setting, though their small size usually allows them to pass under the radar. Perhaps it is no surprise that some jewels would crop up in such a diverse family. The name ‘Sweat Bee’ comes from the fact that they are attracted to human perspiration, sometimes landing on people to lap up their sweat for salt and other nutrients. They are not to be feared however, as they rarely ever sting, and their sting is relatively weak.

The brightly colored species all belong to the largest subfamily, Halictinae. Most sweat bees are metallic in appearance, though typically black or dull and brassy, while some others display the classic black and yellow. It is difficult to characterize the entire family, as they display perhaps the greatest diversity of behavior within a family for any insect.

This is most obvious in their nesting and social habits. Nests are generally built in the ground. Many are solitary, some nest communally, though individual females tend to individual cells, while others have a primitive hive structure with worker castes and an egg laying queen. Some will even parasitize the nests of other sweat bees, killing the larvae inside and laying their own eggs, in a behavior called cleptoparasitism. Oddly enough, even within the more social species, there is generally very little communication between individuals. Sometimes, there is variation within a single species, depending on region. Halictidae are believed to display the most primitive colonial behavior of all social insects, perhaps being the predecessors to all colonial hymenoptera (ants, bees, and wasps). They have proven essential to the study of the evolution of insect social behavior and animal sociality in general.